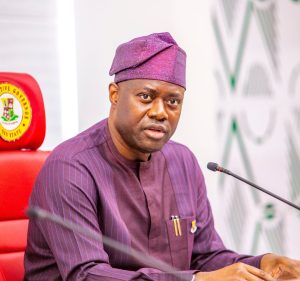 The Governor of Oyo State, Seyi Makinde, on Wednesday said the administration of the ruling All Progressives Congress will not extend beyond 2023.

Makinde in his statement said Nigerians are already tired of APC and would kick it out of power at the general elections.

The Oyo State Governor stated this at the inauguration of the South-West PDP Zonal Executives, held at the Government House in Agodi, Ibadan.

According to Makinde, there is an urgent need to address the challenges of insecurity and economic recession.

He also called on members of his party to show Nigerians that it is prepared take power back at the centre.

“I was reading in the newspaper where a national leader of the APC said that the APC will be in power beyond 2023. I want to say it is a big lie.

“Nigerians are tired of the misgovernance of the APC at the national level. Is it insecurity? Is it economic meltdown? Is it the aloofness of the entire leadership of government?

“Is that what is giving them the assurance of continuing beyond 2023? No, Nigerians will not take that”, he added.

The governor charged the new executive members of PDP to bring aggrieved members back to the fold.

Meanwhile, the Independent National Electoral Commission, on Wednesday announced that the timetable for the 2023 general elections in Nigeria would be released in November 2021.

The Chairman of the commission, Mahmood Yakubu, disclosed this at a public hearing on the Electoral Offences Commission (Establishment) Bill, sponsored by Senator Abubakar Kyari.