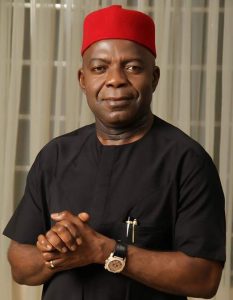 A former governorship candidate of the All Progressives Grand Alliance (APGA) in Abia State, Dr. Alex Otti has warned that people need to drop the erroneous belief that a 2023 Igbo presidency would solve Nigeria’s problems.

The politician argued that Nigeria has many fundamental and structural problems beyond what handing the presidency to a particular region can solve.

In his view, poverty and insecurity are two major issues confronting the country and need to be addressed for Nigeria to move forward.

Otti, however, clarified that his position is not against the 2023 Igbo presidency as he also believes that power should shift to the region once President Muhammadu Buhari completes his tenure in office.

“A situation where close to 90 million people, representing 43 per cent of our population, live below the poverty line of less than 1.90 dollar per day, makes the country a veritable candidate for insecurity of the highest order.”

“If you have followed my politics, you would realize that I do not believe in primordial sentiments. I believe that tribe and religion are basically smokescreens used by politicians to drive personal interests.”

” Having said that, I also know that arrangements about power shift have remained the fulcrum of our politics in Nigeria. That is not to say that our salvation is going to come from that.”

“Would that solve the problem of Nigeria? I think not. There are some fundamental structural problems that must be dealt with for an egalitarian society to be institutionalised,” he said while speaking with sunnews online.

Meanwhile, former President Goodluck Jonathan has categorically denied nursing any ambition to contest the 2023 presidency and return as Nigeria’s president.

Jonathan while speaking on Friday said reports about his interest in contesting the 2023 presidential election in Nigeria were only speculations.

He made the declaration when he paid a condolence visit to Delta State Governor, Ifeanyi Okowa on the death of his father, Sir Okorie Okowa at the Government House in Asaba.

According to the former Nigerian president, he will devote his time to serving God and humanity to the best of his knowledge.

In his words: “On the rumour of my interest in the 2023 presidential election, it was mere speculation.

“I will continue to serve God, humanity, Africa, and the world to the best of my ability and with all sense of commitment and sincerity.”